This article appeared in the SF Chronicle today, August 26th 2010, previewing Monday's ViolaMania! event at Freight & Salvage with an interview with Ethan Filner, acting President of the NCVS and organizer of ViolaMania -- with lots of help from his friends...

Remember - while the show starts at 8, there will be a pre-concert potluck and chamber music in the lobby starting at 6:30 along with tons of raffle prizes on display.. you'll be able to buy raffle tickets and ViolaMANIA! t-shirts, and to check in and/or join the NCVS & AVS at our nifty registration table so that you can gain free admission to the actual concert. Come early and join the party! 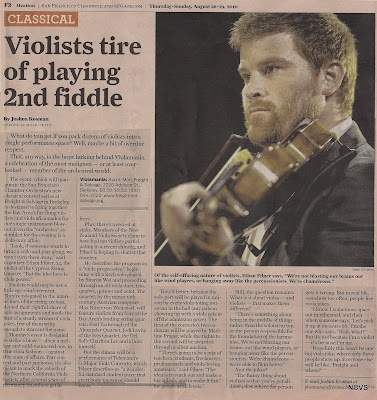 Violamania at Freight & Salvage in Berkeley

What do you get if you pack dozens of violists into a single performance space? Well, maybe a bit of overdue respect.
That, anyway, is the hope lurking behind Violamania, a celebration of the most maligned - or at least overlooked - member of the orchestral world.
The event, which will inaugurate the San Francisco Chamber Orchestra's new classical concert series at Freight & Salvage in Berkeley, is designed to bring together the Bay Area's far-flung violists and viola aficionados for one single-instrument blowout. Even the "orchestra" assembled for the evening is a viola-only affair.
"Look, if someone wants to bring a cello and play along, we won't turn them away," said organizer Ethan Filner, 34, the violist of the Cypress String Quartet. "But the idea here is viola power."
Violists could maybe use a little ego reinforcement. They're relegated to the interior lines of the string section, denied their rightful share of solo assignments and made the butt of a steady stream of viola jokes, few of them witty enough to warrant the name.
Monday's event is designed to strike a blow - albeit a mellow and mild-mannered one, in true viola fashion - against that state of affairs. Part concert and part jamboree, it's also meant to mark the rebirth of the Northern California Viola Society after several years of dormancy (members get in free).
Plus, there's a record at stake. Members of the New Zealand Viola Society claim to have had 150 violists participating in a recent shindig, and Filner is hoping to shatter that number.
He describes the program as a "viola progressive," beginning with a Bach solo played by Sharon Wei and proceeding through an all-viola duet, trio, quartet, quintet and octet. The quartet, by the minor 19th century Austrian composer Max Ritter von Weinzierl, will feature violists from four of the Bay Area's leading string quartets: Paul Yarbrough of the Alexander Quartet, Jodi Levitz of the Ives Quartet, the Del Sol's Charlton Lee and Filner himself.
But the climax will be a performance of Telemann's G-Major Viola Concerto, which Filner describes as "a wonderful standard student piece that everybody knows or should know."
They'd better, because the solo part will be played in unison by every viola-toting musician in the hall (any patron showing up with a viola gets $1 off the admission price). The first of the concerto's two cadenzas will be played by Madeline Prager, while the rights to the second will be awarded through a silent auction.
"There's going to be a mix of teachers, students, freelancers, professionals and viola-loving amateurs," said Filner. "The idea is to reach out and make a big splash, and to make it fun for people at all levels."
Still, the question remains: What is it about violas - and violists - that makes them different?
"There's something about being in the middle of things rather than the soloist on top, or the person responsible for the foundation of the harmonies. We're not blasting our brains out like wind players, or banging away like the percussionists. We're chameleons - we're able to fit in better."
And the jokes?
"The funny thing about violists is that you've got all these jokes where the person gets it wrong. But in real life, somehow too often, people live viola jokes.
"I know I sometimes space out in rehearsal, and then when someone says, 'Let's pick it up at measure 88,' I'm the one who says, 'Wait, what?' But it's not because I'm a violist - it's because I'm me.
"Hopefully this won't be one big viola joke, where only three people show up. Everyone else will be like, 'Freight and where?' "