"Making music should always be joyful. Music is one of the great gifts we all have in life.   Its mystery and power continues to reveal itself through our study and performance."
Dr. Thomas Tatton


Our Spring Salon was a big success, an audience of string players assembled to pick up some new and creative practice tips and get inspired. We had a small contingent of violinists joining the group, showing some spirit in working around the clef reading issues and learning from our esteemed presenter. A description follows:

Dr Tatton began with the five senses - we can use these in distinct ways to add enjoyment and dimension to our learning process. Have you ever thought of “tasting” an f natural? What would it taste like? What would it smell like? When this was presented to a student in the past, it became a distinct memory, something that student would never forget. And it is fun - much more fun than repeatedly saying, "no it’s a half step!"

To explain imaging, here is an effective, simple illustration of what is meant by using imaging or visualization in practicing. Tom asked us to think of a simple everyday motion, such as taking keys out of a pocket or bag. He suggested we imagine that and then actually do it. To use imaging to help with a passage we are working on learning became far less mysterious. We can also use our imaginations to think of weight - such as contrasting the feel of preparing to pick up a paper clip versus an anvil. We can think of weight in our bow arms using images appropriate to the music. Tom had us imagine standing in a swimming pool and gradually letting our arms release and float on the water as a demonstration of another idea for thinking of weight and pressure of the bow in a new way.

Texture - can you hear burlap? How about velvet? What color do you hear in your piece? Can you try that phrase now in a different color? Dr. Tatton demonstrated the opening of Schubert Arpeggione as we listened with eyes closed to hear the color and were rewarded with the rich dark sound he produced in the opening bars.

Dr. Tatton then discussed the attitude required for productive practice. It is important to observe ourselves without judgement and notice what works. Moving on to playing our instruments and trying some things out, with a short excerpt we quickly memorized a few bars and then played it thinking about and watching a single aspect of technique at a time. Once through we watched only left hand fingers, then just the left thumb. We adjusted the amount of pressure we used with the thumb and observed the difference that made. We watched for bow arm, left elbow, etc. All the while cultivating “non-judgemental awareness”, just observing for ourselves what was working or not working.

One of the liveliest parts of the afternoon was the “Witches’ Dance”. We first played through the familiar song. Then for a fresh take on it, we learned the dance for the song which involved stomping right foot, then left foot on the accented eighth notes, then twirling on the triplets. Dr. Tatton asked us to imitate the witch melting with water thrown on her as in the Wizard of Oz for the minor section. Everyone was laughing and having a good time playing the song and trying the dance - Witches’ Dance will never be the same!

The use of stories and dance to stimulate more engagement with the music also brings enjoyment to practice sessions. Dr. Tatton also shared with us a story that one of his students had made up for “Humoresque”. The narrative fit perfectly to the song as we tried it out, and brought the song to life in a new way.

Some other suggestions touched on in this afternoon packed with ideas:
-Have a plan with your practicing, ideally a daily, weekly and long term plan.


-Slow practice: Tom Heimberg, the wonderful violist and practice guru said, “Slow practice is playing a difficult passage slow enough to play it perfectly”. This provides a perfect rule of thumb when you are wondering, how slowly should I be practicing?


-Do some stretching, keep your physical instrument limber and pay attention to your arms and shoulders. Breathe, release your outside distractions and pressures.

-Gather items you need before you practice. Make sure that you have your metronome, pencils, stand, notebook, recording device at the ready. To eliminate distractions it’s great to have a well-lit and uncluttered room. A regular practice time is a big help.

We rounded out the afternoon with a group play through of the Telemann Double Viola Concerto Many players were seeing this music for the first time and got a chance to play it with gusto.

There were many more ideas presented in this fun afternoon. Dr. Tatton gave us packets of handouts with further reading and musical examples. The string players who gathered for this Salon made it clear through their engagement that they appreciated and absorbed the ideas, and gave Dr. Tatton a big round of applause to show it. 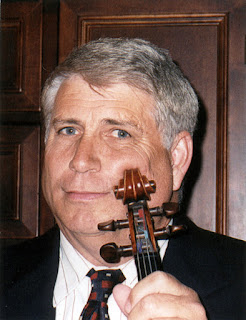 Dr. Thomas Tatton is a Suzuki and Rolland trained teacher. He is a retired string specialist with the Lincoln Unified School District in Stockton, California.   Formerly violist and director of orchestras at Whittier College and the University of the Pacific, he holds a D.M.A. from the University of Illinois.
Dr. Tatton has performed, lectured and conducted youth orchestras throughout North America, South Africa, Canada and Europe.  He has also served as a solo string, chamber and orchestral adjudicator in Illinois, Nevada and throughout California, most notably as lead string adjudicator for Bay Area CMEA.
Dr. Tatton served as the first Master Teacher for the CSU-Sacramento String Project; his monograph on first year string teaching, "Connecting the Dots", was published in 2003.  In 2005 California named Dr. Tatton “Orchestra Educator of the Year” and in 2011 the California Music Educators Association-Bay Area honored Dr. Tatton as ”Outstanding Educator of the Year”.  Other awards include the second highest award offered by the International Viola Society – the “Silver Alto Clef” in 2004 and the Maurice Riley Award in 1999 for distinguished service to the viola and to the American Viola Society.